This was sent to me on 22nd Oct. It agrees with what I’ve seen and read elsewhere – including as mentioned by Australian MP Craig Kelly in a speech to Parliament in Oct 2020.

I am sending you some information that is SOLID evidence about conspiracy to suppress Hydroxychloroquine as cure for Covid19…(HCQ), that as result killed over 100000people in US only!

I have read your article on https://cvpandemicinvestigation.com/ and I feel that this evidence can be added to your collection, and might be VERY useful!

It implicates WHO, and CDC/NIH and its heads…

Apparently WHO organized Solidarity trial and Britain scientists did Recovery largest HCQ world trial at the time, problem is they overdosed people with ~LD50 dose (for lightweight persons) in that study in effort to supress its efficacy (i presume in Gileads favor>Remdesivir that looks like it was Fauci’s favorite)!

Lot  more on this in detail here:  https://ahrp.org/covid-19-has-turned-public-health-into-a-lethal-patient-killing-experimental-endeavor/  this link above is must read (KEY evidence)!

This is key part showing protocol: 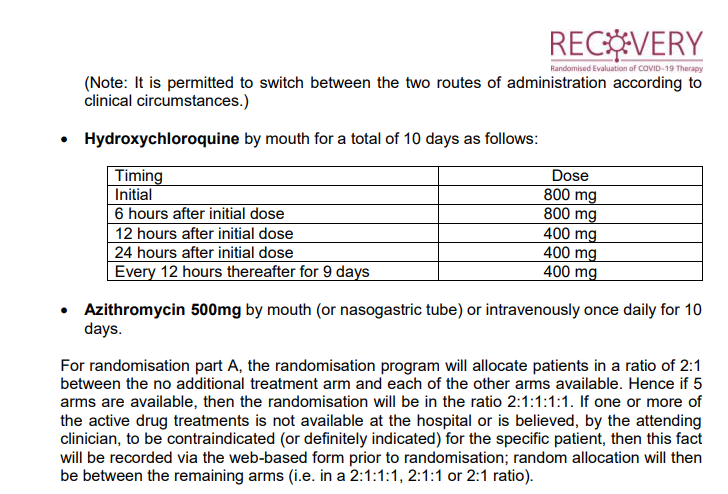 Where protocol can be seen in their trial documentation…

Read details in article i linked above…this is only research that analyses toxicity in actual humans with fatal outcomes!!, that data is closest to actual LD50 number for humans!

There is strong evidence of intent to harm patients in that study, and to prove HCQ ineffective, why?  Because evidence:

Last week, I was alerted to the fact that India’s ICMR, its official medical research agency, had written to the WHO, telling WHO that the hydroxychloroquine doses being used in the Solidarity trial were 4 times higher than the doses being used in India.  Then I learned that Singapore has been hesitant to participate in the WHO trial, due to the hydroxychloroquine dose.

Also Brazil study was all over Media, and they knew about problems with high dose arm in that study:

We also know that in Brazil, both a high dose and a low dose were trialed, and by April 17 the high dose arm was stopped prematurely due to an excess of deaths.  The low dose trial continues in Brazil.

So they had fresh C19 evidence that high dose leads to increased mortality, compared to normal /lower dosing in same study as success, BUT they still choose to go with higher dose, even after warnings!?

If you want to prove water is BAD, how would you design that study?

IF you know water LD50 is 90ml/kg… simple you come close to overdosing people with water, and you will start seeing some deaths!!

Now problem is that NIH/FDA did their recommendation based on this fraudulent (murderous) recovery study described,  and NIH panel is corrupt webbed with conflict of interest (link on time in video)  https://youtu.be/aSJRyYf01H8?t=2602  also current meta result of largest HCQ studies condensed looks like this 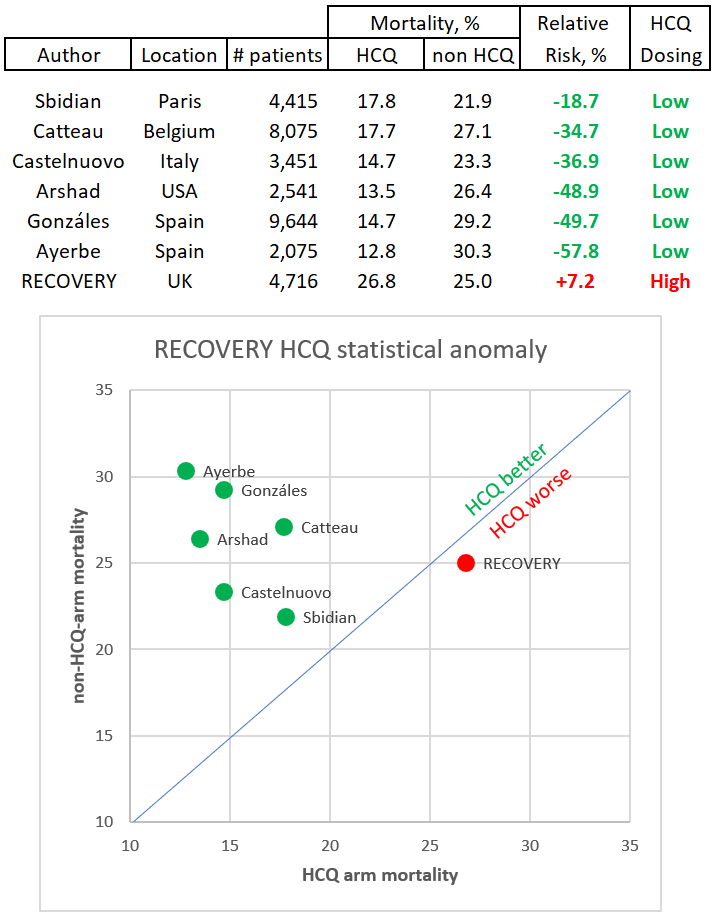 And more studies can be found here: https://c19study.com/ , but note other treatments that are even better-> ivermectin, and mega-dose of vitamin D that reduces ICU admission by 25x (TIMES) https://www.sciencedirect.com/science/article/pii/S0960076020302764#bib0055 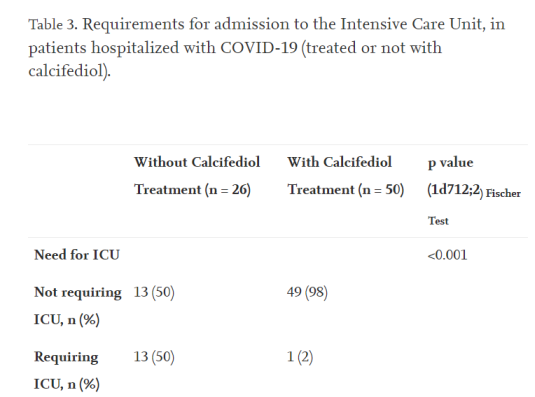 Obviously there are therapeutics that makes HCQ old story by efficacy BUT i want to focus on HCQ because of active media AND large regulatory organizations (FDA/NIH…) suppression in concert with media and social networks that resulted in excess deaths! And because HCQ eficacy was known to them from the beginning and COULD save more then half of the lives (not all for sure since age of most of the patients is average dying age in the US, and saving all would mean increasing average age in US which seems impossible!) BUT if we analyze best case scenarios  i.e.  Dr. Zelenko in NY, and  and Didier Raoult in France and few others,  had reduction in mortality to 1/10th of patients in their care!!

And because of plenty of growing evidence makes it low hanging fruits with good evidence!

I.E. this is one of many examples how media cherry-pick papers (CNN) in mid May:

“””So this is how CNN reports this  https://www.cnn.com/2020/04/21/health/hydroxychloroquine-veterans-study/index.html

This is the quote from the paper that explains how they “cherrypick” patients:

Basically they gave drug only to patients with more severe symptoms, also drug was administrated too late (past viral phase) (check EVMS protocol) and no Zinc, HCQ does not work well without zinc, since it only ionophore that transports Zinc inside the cell and zinc is responsible to stop RNA polymerase, if you are Zn deficient, simply wont work…

In Italy they  did retrospective study (after the fact) to find out the rate of infection among Rheumatoid arthritis/Lupus patients that are on that drug for years, out of 65000 people, only 20 contracted the disease, and those were all mild cases! this is use as PReP (pre exposure profilaxys)

Also Fauci cherry-picks papers in same fashion as media (“surgisphere”, i caught large problem with the study in 15 minutes, while few days later he went in front of the cameras and boast about that “this is BIG evidence”, there is bunch of examples of him cherry-picking to get his point), i have zero faith in anyone that does that and his credentials or authority is gone imo in instant, that uses his expertise to sway public for someone’s (self?) profits, his work with Gilead is established in AIDS crisis and yo can find evidence that he already done the same thing then, lasted for 12 years and cost estimate 17000 lives…https://fort-russ.com/amp/2020/04/shedding-light-on-the-dishonorable-record-of-dr-fauci-a-real-mengele/

his connections with the “crew” are analyzed

Since then amount of evidence for suppression bias in MSM grew a lot, also evidence…

I suggest you check video linked in total, the story is deeper then all of this, medical science is corrupted with money unlike any other field, that is related story but might be too big to work it in all of this!

It is known behavior tobacco industry did it in the past, more recent is Monsanto and poisoning of the scientific well https://pubmed.ncbi.nlm.nih.gov/29843257/ real data bubbles to the surface only when you litigate and NOT SETTLE, then discovery information becomes public, until then corrupted science can perpetuate for decades!!

In a nutshell reasoning for this situation that we are in now is old one, and now obvious, inflated in this crisis:  FDA requires clinical expensive trials costing on average 2.8B$ per drug/treatment authorization, no business will go trough the process if they cannot earn on top of this cost, so everything that is cheap and effective, without means of IP protection for future profit will be avoided by investors as not profitable hence not FDA approved no  matter how much lives it saves, and how well it works!!!

That is core of the problem! Everything else spins from this regulatory “setup”;

On top of that lot of times effective treatment is even suppressed if they have their “solution” in the game (Gilead and remdesivir Vs CHQ!  Remdesivir made them so far 2-3B$ my estimate) it is classical example of protecting their investment, even if it means killing 100’s of thousands of Americans or even millions of world citizens in the process (remdesivir does not save any lives according to all available trials latest one ( https://www.nytimes.com/2020/10/15/health/coronavirus-remdesivir-who.html it is so evident that even NYT published this one, maybe Gilead did not grease the NYT wheels enough), to be more exact its efficacy is none and compared to many other solutions in works according to current evidence, but profit potential is 100’s of times larger hence this is our reality!!!

This story is latest that falls in line!

That is gist of the problem, now in this mess all is needed to follow the money and sue!

Also this video is must see…curious, is this legal trap that they put them selves into?

Some links that might offer additional info in case you care…

Some doctors think they’ve found a cheap, generic drug which treats COVID-19. So why hasn’t anyone heard of it? — WHYY    Research block ties funding to only profit, not efficacy and saving people…

https://theprint.in/health/hcq-breakthrough-icmr-finds-its-effective-in-preventing-coronavirus-expands-its-use/427583/?amp&__twitter_impression=true  India run its own tests and it works

https://www.zerohedge.com/political/science-not-about-consensus  Science is not about consensus