Dr Mike Yeadon, Former Pfizer VP:  ‘Your government is lying to you in a way that could lead to your death.’[1]

Even before the end of 2020,  thousands of people, including many experts, agreed the UK Government was responsible for acts of fraud, medical malpractice and domestic terrorism.[5]

From the Government’s own “Vaccine” Leaflet,[6] we read: “In the UK several different types of COVID-19 vaccines will be used during 2021. The vaccines will only be approved on the basis of large studies of safety and effectiveness.“

This means the “vaccine” is experimental and unapproved. Official figures show 1000s of adverse reactions and hundreds of deaths following “the jab” – in the US[7] and the  UK[8] – yet using google to search for this data brings up other links. The vaccine leaflet does not list all the side effects which have been experienced. Further, it states that you must still wear a mask etc – so offers no real protection.

Further, the leaflet states: Will the vaccine protect you? – The COVID-19 vaccination will reduce the chance of you suffering from COVID-19 disease. It may take a few weeks for your body to build up some protection from the vaccine. Like all medicines, no vaccine is completely effective – some people may still get COVID-19 despite having a vaccination, but this should be less severe. 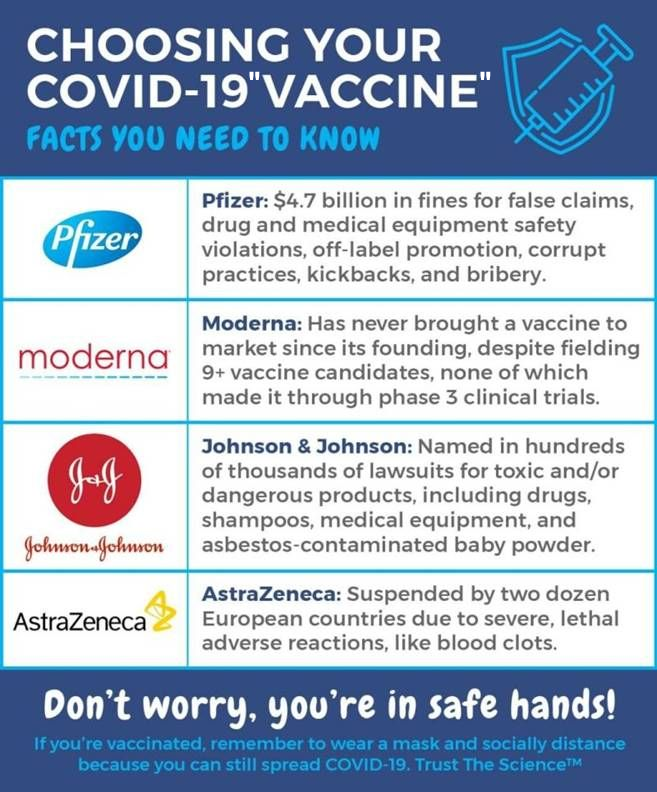 There are plans to administer the “vaccine” to children – but this could be disastrous. There is no medical reason to vaccinate children for the COVID disease – the proportion of children that have exhibited severe symptoms or fallen ill is so small that it is barely measurable.[9] With a fraudulent test, how can anyone even reliably say they are infected? If you asked a child to take the vaccination, would they pass the Gillick Competence Test?[10] People go along with this because of the months-long all-pervasive media-generated fear campaign.[11] “Big Tech” companies like Youtube, Facebook and Twitter are censoring voices and publications that challenge the “COVID Bad, Vaccine Good” narrative. Groups or Channels which have been pulled include Lifesite News, Corbett Report, World Doctors Alliance, America’s Frontline Doctors and Dave Cullen. Dr Heiko Schoning (Germany)[12] was arrested and Dr Simone Gold (USA)[13] was raided by the FBI after expressing scepticism of the government/media narrative.

The Line in the Sand

The PCR test for the Covid virus is fundamentally flawed and unreliable,[14] and 3 different courts in Portugal[15], Austria and Germany[16] agree.

•           BUT you still believe the stories of mass death and terrible sickness around the world.

A number of public vaccine advocates and health professionals have died soon after having the COVID vaccine.[20]

In the UK, Vaccinations began on January 6th and a Southern UK Funeral Director has said – “I’ve never known a death rate like it in 15 years”. [21]

Renowned scientists, doctors, journalists try to tell you that questions need to be asked. They get censored, banned, suspended, arrested …….

WHAT IF you or your family are ill, but cannot get the treatment you need because everything that isn’t Covid-19 is put on hold?

WHAT IF it became clear the vaccine is causing serious adverse events, but you are told you still need to take it or else you can’t work, go to school, university or travel or go shopping?

WHAT IF you were told your child or your grandmother needs to be taken to a quarantine facility aka isolation camp?

WHAT IF you were told people in isolation camps are never allowed to come home again?

What do they have to tell you for you to start asking questions?

Where is Your Line in the Sand?