I was contacted by someone living in Scotland and he sent me his account of a recent trip out, to a place 10 mins drive from where he lives.

We can clearly see this is not about any virus. The police were not using any protective measures and did not offer any to the person this happened to.  It is purely an excuse to arbitrarily fine them for moving freely – all because of a manufactured or fake story – which makes everyone a threat and portrays everyone else as being in danger….

Written immediately after the incident that resulted in me being giving an ASBO for….

BEING OUTSIDE WITHOUT REASONABLE EXCUSE

I am [in my 50s] and now live in Edinburgh with my parents [both in their 80s], looking after them – [both have] medical issues.

We live 10 minutes from the coast and I frequently visit the [..] coast road where my father can sit and watch from the car, Cramond Island with its varied tidal levels, all the dog walkers, joggers and families with kids on scooters. In addition, there are boats and ships on the Firth of Forth with faraway mountains, plus this is directly under the flight path of Edinburgh Airport so planes whizz over all the time. This is a vital stimulant for his mind and essential to his well-being. After one week of lockdown, I drove my father down to just see the sea, he was beginning to show extreme anxiety and was getting confused.

On arrival I was confronted by four police, two white men, a white woman and a black man, wandering about “checking” people. I stepped out of the car and enquired what was going on and to ascertain that we could just sit in that car. Apparently not.

Meantime dog walkers, joggers and people just walking, are all around. As I was leaving, as instructed, having been informed the law being applied was the brand new Coronavirus Act, I intimated words that expressed an opinion that Britain was now like China. At that point the black policeman decided I should get out of the vehicle. He started writing a “ticket” using the form for an ASBO,

Whilst this was going on one of the policemen was telling me Covid-19 was killing thousands of people and it was very dangerous.  I asked him if he had read the government report on seasonal flu statistics

.. he clearly had not, I also asked if he was aware that on 19th March 2020 the official statement of the UK government DOWNGRADED covid-19 to NOT be a Highly Infectious Contagious Disease.

His argument in response was to state “that’s wrong” or some such wording. This is a UK law enforcement person denying a FACT from our government, and then he proceeded to bolster his position by referencing TV News, Boris Johnson, and Nicola Sturgeon. One of the white police and the female police started informing me that the “virus” is all around and even blowing in the wind so therefore we were all in mortal danger.  The black policemen asked for ID, I didn’t have any, but regardless I said “I do not have to give you ID”, he then asked if I had a Credit Card???  When did my banking and credit rating become part of the business of the police?

I know that having my car licence plate they can check exactly who I am within seconds on the radio. All reason had now gone, so I verbally game my name and details.

I had to inform him to stand 2 metres away as he was edging closer, in what I believe was an act of provocation to further entrap me if had reached out and simply touched him, which is assault, I moved sideways and avoided this. As I recall I was then asked “where were you born”, I said Britain, and he asked what nationality I was, I said British, then a short time later, the black police officer asked again what nationality I was, I responded British.

This is why I have described the racial identity of these police person, because I suspect he was provoking me to challenge him on his “Britishness”, thus incriminating myself under Scotland’s severe “Hate Crime” laws. He was clearly relishing the power and enjoying the experience. I did not fall for it.

At one point he was about to lean on the back of my car to use as a writing board, I had to quickly tell him to not touch my car. After all, is there not a highly contagious infectious disease about? Once the form had been filled in, he then handed it to me to sign, offering me his pen. As, apparently, as none of the police had masks, or gloves, and no sanitizing gel on hand I was not comfortable touching his pen, which would have been touched by the dregs of criminal society. He said if I did not sign, then I would be arrested, which would mean being handcuffed, taken to a station and abandoning my father alone and confused in a car whilst a chilling rain was starting. I asked if he had a sterile pen, he didn’t but handed me just another pen from his jacket.

Having been put through this experience there can be no doubt that the “pandemic” has nothing to do with a virus or containment but is a roll-out of a police state and extremely disturbing authoritarian control of a deliberately frightened population being fed a pack of lies and misinformation. I can challenge this in court, but I know this is costly, futile and soul-destroying. Also, as I am carer for a couple of octogenarians, I have to avoid the stress they would have. Alternatively, payment in 30 days means it costs £30, thereafter it doubles, and doubles, and if unpaid I would eventually be sent to jail; for driving my old dad down to see the seaside on a rainy day.

So, I am now a compliant citizen, who is now logged in the database, and if pulled up again would be processed in a different fashion, and more severely. We live in a police state. 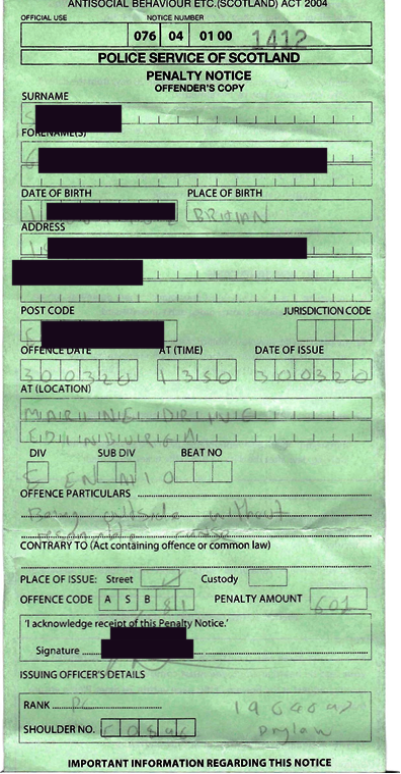 This (below) then appeared in the Scottish Sun.  My contact explained:

The papers also have lied that I was out “walking”, I wasn’t, we intended to sit in a parked car with the windows closed. Also, I was back in the car and was leaving then the black policeman suddenly sprang into action and ordered me back out. He clearly has some sort of bee in his bonnet. The law states that a “reasonable excuse” is getting out to “do exercise once a day”, the effort to get dressed and get to the car was a real effort for a man in his 80s to do, so are the police vetting people so if he had attempted jogging it would be OK, under their fluid definitions of law.

COPS in Edinburgh were seen enforcing the social distancing measures by patrolling a beach and sending people away who arrived to exercise or walk their dogs.

The team of eight officers had also closed off the car park at Silverknowes promenade in the capital. 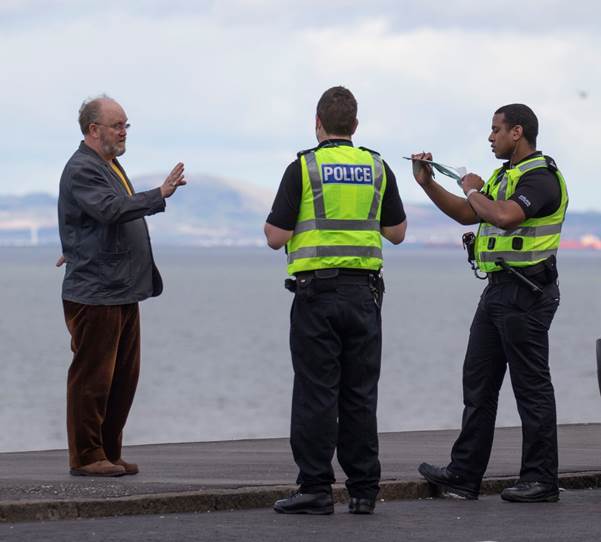 As cars drew up the officers were seen speaking to the drivers and sending them on their way.

One angry driver was seen shouting at cops after being asked to move on.

The man was refusing to leave the and started arguing with the officers before they swooped on him and got him out of his car. 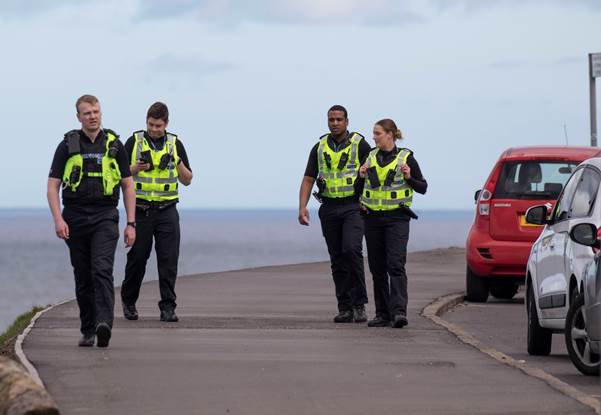 Police were out in force

After a few minutes of the man screaming at them they hit him with a fixed penalty notice for breaching the new laws.

The man continued ranting at the officers before finally accepting the ticket and driving away.

Another woman who walks her dog at the popular beach every day said it was ridiculous that they are stopping locals from using the beach.

Shirley Jackson, 54, said: “I come here every day to walk the dog and get my exercise but today I am told I can’t do it and should only use my car for essential journeys.

“It’s safe here as the area is huge and there is plenty of space so folk can social distance.

“We will now have to walk in the streets where there are already folk walking and will come into contact with more people.

“I don’t understand this at all.

“The majority of people that come here are sensible and have been socially distancing.

“I enjoy coming here as it gets me out the house and gets me my exercise and some fresh air.”

The officers spent around an hour speaking with people before leaving the area.

Chief Superintendent Sean Scott said: “Lots of people have been parking in the Marine Drive area and it’s really important that people follow the guidance from our public health experts in order to save lives and protect the NHS.”

A Scottish Government spokesperson said: “People are advised to stay local for exercise and use open spaces near to your home where possible avoiding any unnecessary travel, including driving.”