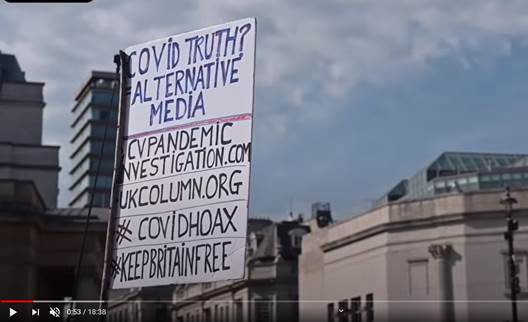 Was the UK Coronavirus Bill “In the Works” In December 2019?

Following on from the link I was sent to “Hansard” proceedings in the UK Parliament on 23rd March 2020, Where Matthew Hancock lied to Parliament, it seems I didn’t read enough of the text…

I can confirm that the Bill is to deal with the current coronavirus emergency, and that is an important point. But I would also say that although the world has changed in the past three weeks in ways that many could not have imagined, every measure that has been taken by the Government has been part of the action plan that we published three weeks ago. Of course, the Bill has been drafted over a long period, because it started on the basis of the pandemic flu plan that was standard before coronavirus existed and has been worked on over the past three months at incredible pace by a brilliant team of officials right across Government. The Bill is consistent with the action plan, so while some people might have been surprised by each of the measures we have taken, they have all been part of the plan that we set out right at the start. I can confirm that it is only for coronavirus.

I also want to give further detail to my previous answer to the hon. Member for Cardiff South and Penarth (Stephen Doughty), which is that section 21 does not specify what it defines as a gathering or an event. It is deliberately broad, so it could include a care home, should we need it to, and that would be defined in secondary legislation should that be necessary.

As this was on the 23rd March, that suggests work on the Bill was started around 23 Dec, 2019 – yet the WHO declared a pandemic on 11 March 2019 – only 12 days before this speech. Just a coincidence of planning – and demonstrating, of course, the wonderful forward thinking of government officials and advisors… Not forgetting, of course, that the bill was over 300 pages in length… I wonder who was in this “brilliant team…” Perhaps an FOI will reveal this and what their interests might be.

Does the violence look staged?

Until four days ago, AstraZeneca was testing the Oxford University vaccine on children, before they halted the tests after an adult subject was reported to have developed symptoms of transverse myelitis, an inflammatory syndrome that affects the spinal cord, which is known to cause serious neurological disorder.

The previously untested COVID-1984 vaccine, which failed to cure monkeys of the virus [that has never been proven to exist], was being tested on children aged between 5 and 12 years old, with the alleged consent of their parents or guardians, despite the fact that their young bodies are much more susceptible to vaccine injury than adults.

Discussed in this video https://www.youtube.com/watch?v=XlKpSRXpfOc

Exposed: There’s a new  US federal court to handle all the expected COVID vaccine-injury claims

The simple truth is: the US government is anticipating many people will be filing claims for compensation, when their family members are harmed or killed by a new COVID vaccine.

Of course, the government isn’t coming right out and admitting that.

The press will tout the usual excuses for injury and death. “He died from COVID, not the vaccine.” “Well, there was just one bad batch of vaccines.” “Because COVID is such a dire situation, and we’re rushing to save lives, a few mistakes are inevitable.”

“The Love of the Lie” by Stephen Murphy

I stopped believing in anything when I was 12 years old

And started deconstructing everything that I was ever told

I thought that when I got there, wherever there may be

Who I figured would eventually reach the same conclusions

That society is essentially based upon delusions

I couldn’t help but notice an all-pervading trend

That my friends, or those I had then, just thought that I was mad

And dismissed my eccentricities as a passing teenage fad

And I grew more alienated and distracted from my peers

As I peered in to the rabbit-hole of internet conspiracies

Where totalitarian control and governmental heresies

Have planned to implement an almost incremental coup

And the worst part is they’ll make you think they’re doing it for you.

Or like the last known living outpost of the mentally deranged

Just to mention 9/11 to the blissfully naïve

To simply live-stream the event to millions at a time

But it was also plausible to trust the deep regime

Who some say silenced Dr. King for his right to have a dream

Or who framed Lee Harvey Oswald for the death of J.F.K.

And ran Project M.K. Ultra alongside the C.I.A.

And they’ve a right to those beliefs, of course, though I still stand accused

Of not quite sharing their directives, their perspectives, or their views

As in; I’d sooner trust a lioness to mind my pet gazelle

Than I’d trust most politicians with the basic truth to tell.

Or for suggesting that the planet’s population is abused

Though now to call it common likely causes some offence

Society for the Prevention of the Right to Still Exist.

Of another rigged agenda in these power-ridden games.

But to turn and face the truth or to learn to love the lie.

So I turned my back on politics, and came to the position

Where I couldn’t trust the government or trust the opposition

Or the media, the unions, or society at large

Or those unelected NGOs who feign to be in charge

Who claim the enemy is everywhere around us at all times

Through our mandatory masks that confound us and contrive

To dehumanise our faces and to propagate the fear

That this civil degradation has been planned and thus designed

With our social isolation and conditioning in mind.

With the dangers of dismissing all kinds of critical thought

And to shut down conversations with a label that denies

The way to validation through this labyrinth of lies

Of our elderly in care homes, who are leaving life in fear

By believing politicians who are trying to sound sincere

Or the psychological impact at the heart of all of this.

But I don’t need for recognition, or to pick and choose a side

‘Cause my primary ambitions are to see through the divides

That are carefully and consciously and constantly imposed