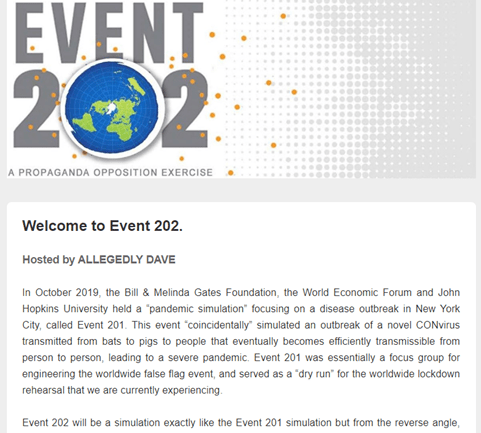 Verbal Admission of Fixing CV Death Numbers in the US

and I put this in my report. I also put that when more and more people die because of lockdown measures, that will “boost” the CV figures – as everyone has it anyway.

This Doctor has seen, first hand, the effects of the lock down/quarantine measures

Quarantined – and you Can Still Get Parking Tickets…

5 polices officers to “chat” with someone who couldn’t park with a permit outside his own house. A serious crime, you will agree.

Derek wrote to me from Vancouver

I’m not sure if this is of any interest to you, but I have literally just finished contacting funeral homes in Vancouver, more notably those in close proximity to the care homes that were deemed to be the “epicentre” of the outbreak over here.

Each person I spoke with re-iterated the same information as the previous. That being it’s business as usual. There are no additional protocols in place (from City, Provincial or Federal Govt.) for collecting, transporting bodies of “Covid19” victims. No further safety protocols needed for handling or ‘washing’ / preparing of such, and no issues with their respective supply chains regarding caskets, urns and embalming supplies. The only increase that a few were willing to volunteer, is in telephone enquiries regarding what to do in the event of a covid19 death, or where to get further information of how to report such.

Also, a major supplier of caskets and urns reported that their business is steady and they have not had to employ extra staff, order more materials than usual, had issues with their supply chains or exact any further protocols (other than no sales calls, appointments for delivery or collection of product) to their business. Strange?

I appreciate that we are fortunate not be as hit hard as the UK or elsewhere, BUT the numbers of dead, mostly in care homes, compared to those actually testing positive do not correlate with the rest of the world. It appears that care homes were targeted to get the word out?

Am just watching the video of Texans protesting on your site, and this leads me to tell you that of all the funeral homes I have contacted today, at least 8 were operated by a company called Service Corporation International, Houston, Texas. A company specializing in care of the dead.

As an aside, Event 201. Is that really its name?, take away the orange representation of the earth and we have Event 21. Hand in hand with Agenda 21. makes sense as Gates’ claim of a vaccine being 18 months away would take us to latter ¼ of 2021.

As I tell my family at most dinner times, this is a test. And we’re all failing. In the year of perfect vision we are being blinded by fear and panic.

My wife who’s from Taiwan. They’ve had no lockdown and only 6 deaths. It’s a farce. To be able to lock down the world just shows how deeply mind controlled the world is. I throw my hands up and a say “perhaps they want to be controlled” Most everyone I talk to just shuts down and they call me a conspiracy nut.  I just keep stuff to myself now. Thanks for all your hard work over the years.

Chris talks about the tests and the media propaganda and the tests:

Likewise, the mass graves on Hart Island have been in use for 150 years…but the recent burials were skewed by Media Fearmongers—who knew better—to suggest that the cemeteries were full and the dead piling up.

Also, the infamous military trucks hauling away the dead in Italy were not a result of heaped high corpses but merely that the Media-Terrified grave diggers who had no protective equipment refused to bury the bodies.

Nightly, packed, chaotic Emergency Rooms are depicted on the “News” with gibbering, tearful medical personnel sobbing into the camera. Personally, I prefer my Doctor’s to be calm and to exhibit the same sort of laconic competence that enables fighter pilots to flourish. Not once have they shown clips from 1000’s of other hospitals where the staff are twiddling their thumbs. My Father’s Wife who is the President of a Hospital here in the States, mentioned that they were losing millions of dollars a day from the costs of emergency measures and lack of usual treatments and fees. One hospital—millions of dollars a day. I suspect that hundreds of hospitals will go under and be gone as a result of this horseshit. Thus, more lives will be wasted.

The reason that useless tests were sent out 2 months ago, was that those orchestrating this Trauma, did not want people to find out how widespread the “Corona Virus”  already was in the population. The baseline data would have revealed early on that the disease was about as deadly as the seasonal flu—as we now know. The Intended Panic would have been prevented by actual science. To forestall rational thinking and actions based upon hard data, the tests had to be rendered useless. Now, on account of the Lockdowns, and the lack of herd immunity, we will have apparent resurgences of the “disease” and lockdowns again in the Fall…and then again in the Spring and on and on. Just as we have Endless War, Phantom Menaces and Invisible, Controlled Opposition, we will now have these Spectral Media Event Plagues.

I’ve been pondering the fates of Anthony Fauci and Neil Ferguson. I, myself, wish them no more harm than what a Tribunal in The World Court might dispense. Watching people be torn to pieces by enraged mobs with nothing left to lose has never been my thing. However, as Civilization continues to crumble and fall apart, and violence becomes more common—either as a legitimate response to starvation, poverty, disease and the breakdown of social understandings—or as a result of organized controlled opposition of the sort that enables government crackdowns supported and applauded by the Fearful populace, it is possible that some individuals will wish to dispense their own varieties of justice. Nevertheless, my guess is that at some point, these folks may be worth more to their Handlers as Martyrs To Science than living emblems of discredited pseudo-science and credulous politicians, lingering on in the public eye as terrible reminders of profound failure and subject to relentless litigation and—oh, so many questions. If they are eliminated, my guess is that it will be done to Ennoble them as Martyrs in the public eye, while demonizing whatever passes for Resistance in the near future, and that it will be sanctioned by the same folks who have arranged the Present Genocide. Personally, I would prefer a Swedish Prison for them, with daily and enforced Scientific Instruction….

I’ve just witnessed “The Scam” first hand right at the source at my local doctors and  hospital where I was kept in for two days regarded an health issue I have with a pacemaker I’ve had fitted recently. Now…. the word on the street was that it was so bad at the hospital that it was basically close to bringing the hospital to a stop yet what I saw couldn’t be further from the truth. I phoned my doctors on Friday with a concern about my pacemaker, they  said they’d squeeze me in but it was really really busy and, they managed to get me see doctor at 4 pm but, “get there for 3.30 to have an ECG scan. I got there for 20 past 3 expecting to see chaotic situation. There was only one other person there waiting in the hour I was there yet there was an abundance of nurses/doctors sitting in a conference room seemingly discussing the crazy situation they’re now in. With only one doctor and one nurse actually working. The doctor seemed reluctant, in fact no he simply wouldn’t give me an explanation of my symptoms simply saying “oh I wouldn’t like to say what it is”  or “I can’t really say…..”. Waste of my time there then so, the next morning I took myself to the “bursting to the brim hospital” not really want to but having no choice to go to the “death building” but, I’m so pleased I did. Rich THE PLACE WAS EMPTY!!! With, as I later found out, ONE HUNDRED AND TEN spare beds in the hospital, 110 !? The staff in A&E said “we’ve never been as quiet” and the staff on coronary ward were saying similar things and, more or less saying “we don’t know why it’s being said we’re at bursting point, we’re bored stiff”. Now If all this death was happening on other wards where staff couldn’t keep up with demand then, I’m sure they would tax other staff in from other wards, the ones I visited, but they’d heard nothing about the tales that are being spread. Busted first hand !!!

One reader asked about organising an opposition or protest group. I explained to them I was part of a 9/11 truth research campaign group – but then they failed to support the truth once we found out what it was – I’ve written 2 books about that! http://tinyurl.com/911ftb  and http://tinyurl.com/911htb

Someone sent me this link – which made me wonder… 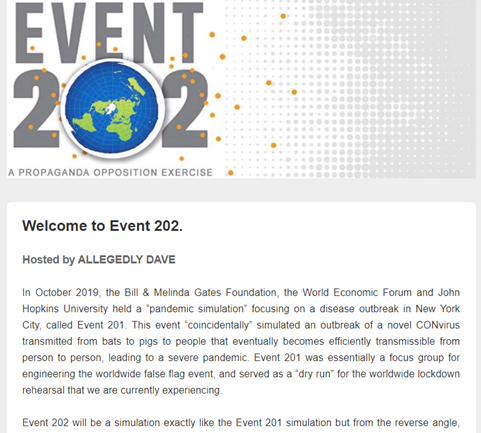 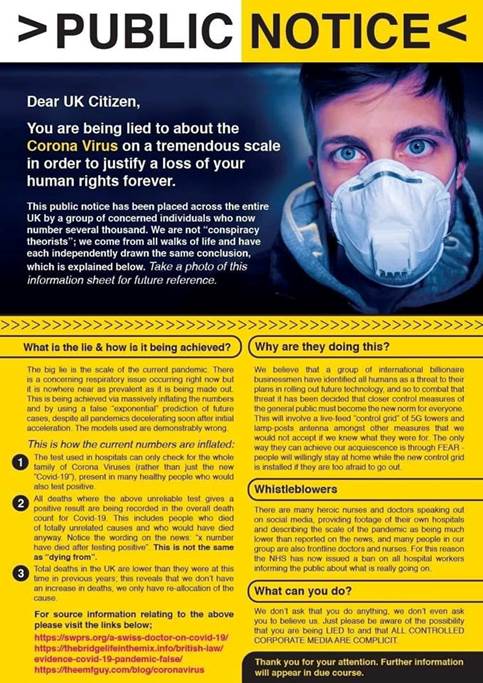 To Serve Man – The Lie Of Philanthropy

“The Amazing Polly” has done some very well-researched videos – and this one is no different. You may remember in the video that Richard D Hall made about a week ago, he concluded that Bill Gates was trying to exploit a “business opportunity” with his vaccines. Whilst this may be true, it also seems there is a darker side to Mr Gates. Someone wrote to me to claim that Richard was “disinfo” and wanted to get into an argument about this. I can understand this when one gets into some of the details – such as those covered by Polly in the video below – e.g. Microsoft using Marina Abromavic to promote a “Hololens” device. Polly also shows a clip of Gates admitting he “made a mistake” regarding his associated with Jeffrey Epstein…. Say no more, ay?