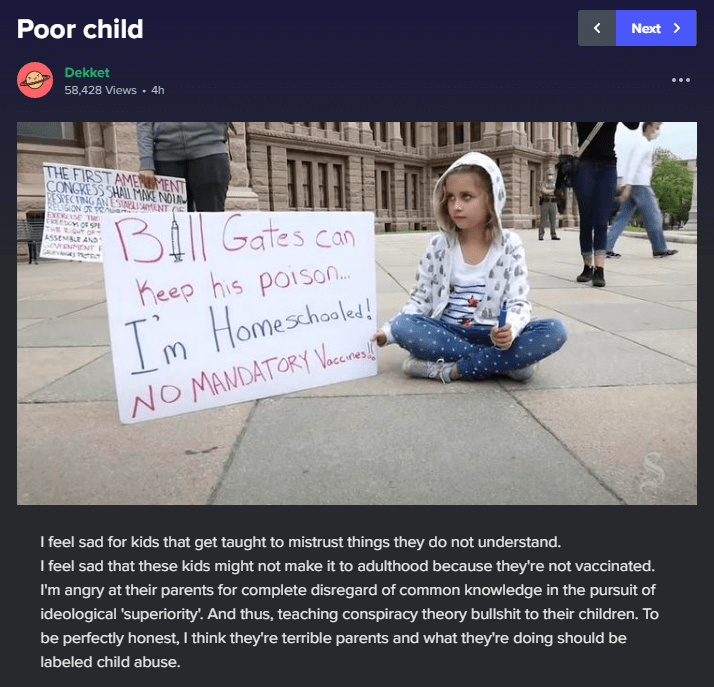 “Together at Home Concert” – Psychological Operation…?

Thanks to Denise who notified me of this. It was a concert that was supported by celebs around the world. The write up makes it obvious, to me, at least what it was really about – being primarily aimed at a younger generation.

The article also notes who funds WHO!

I was sent the video below, about which I was a little reserved” as it is Ben Fellow! Nevertheless, he pointed out some important information about this Group/Website

The UK Vaccine Network brings together industry, academia and relevant funding bodies to make targeted investments in specific vaccines and vaccine technology for infectious diseases with the potential to cause an epidemic.

(Is it just me, or can the wording of that last sentence be interpreted to suggest that they are researching how to cause  an epidemic, rather than prevent one…?) There is an email address on that web page, so I guess what I sent them…

Many of the people listed on this page appear to have had funding, in some form, through the Bill and Melinda Gates Foundation – (BMGF) – and this “steering group” will likely “oversee” the vaccination programme for you-know-what (Chris Whitty’s name appears quite a few times). Others can research the names on that page.

However, he suggests that though the proposed CV19 vaccine may be unsafe (which Bill Gates himself has already implied), he said the Polio Vaccine was “OK” (which evidence suggests is not correct – see the earlier video I posted by Suzanne Humphries, MD.

Ben Fellows (though not using his name) has a page here:

The “Beforeitisnews” site is not very reliable, but I checked some of the details in the article above, and they seem accurate, though there are no links or references.

Demonising Those Who Question Vaccine Safety?

I received this from Matt

I go to a site called imgur.com so I can download jokey clips and cartoons to send to my girlfriend. I have noticed they have always carried the ‘hate all anti-laxer’ message pretty consistently but now they seem to have ramped it up, with no comments (as far as I can see) giving the counter viewpoint. I believe this site would be aimed at teenagers and young adults – who they would need onboard to drive their narrative.

I worry social media sites like this are going to step up the brainwashing ahead of what may be a mandatory vaccine, or as near as you can get to it.

Here is an example, not sure if it will translate – but if you go to that site, look for the picture of a girl holding a sign https://imgur.com/gallery/MZMgCWm 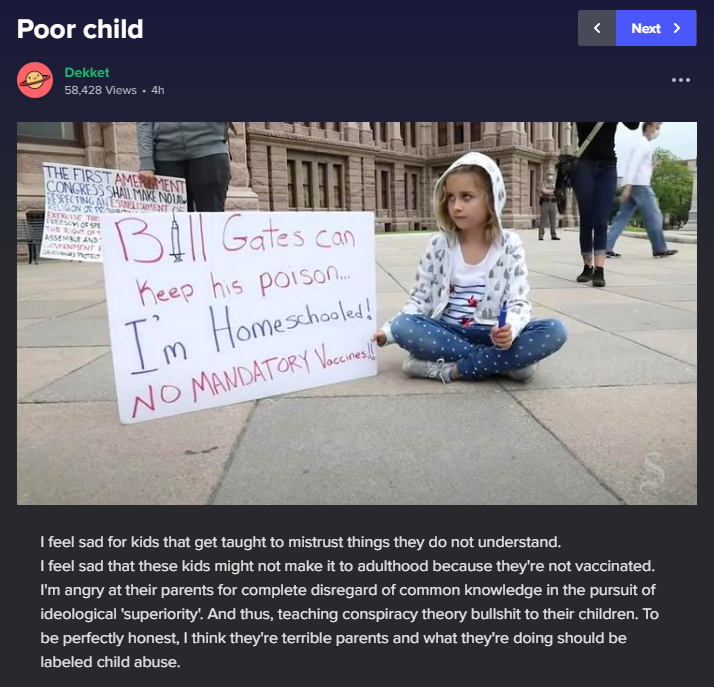 I feel sad for kids that get taught to mistrust things they do not understand. I feel sad that these kids might not make it to adulthood because they’re not vaccinated.I’m angry at their parents for complete disregard of common knowledge in the pursuit of ideological ‘superiority’. And thus, teaching conspiracy theory bullshit to their children. To be perfectly honest, I think they’re terrible parents and what they’re doing should be labeled child abuse.

As a general rule, I’m of the impression that people should be left to their own devices. Government should leave people the fuck alone. That is until, they hurt others. To me, this makes 100% perfect sense. I think most would agree.

In the case of anti vaxxers, they are undoubtedly hurting others. This conspiracy theory spreads – somewhat ironically – like a virus. To top it all off, we’re in the midst of a fucking pandemic, which balloons this issue all the more. There are people risking their lives to save others who will turn right around and inflict more damage on society as a whole.

I’m fucking sick of this shit. And to drag Bill Gates, a fucking hero in this situation, into your conspiracy bullshit? Sorry for the rant. I had to scream at someone and what better place than the void of usersub?

He confirms the COVID-19 has not been properly identified – and he repeats several points which have been covered in earlier updates.

The video is made up of ones which were originally on his YouTube channel but, unsurprisingly, he has deleted them.

Dr Mikovits’ name has come in several messages I received – she speaks of the time when she worked with US Pandemic “Advisor” Dr Anthony Fauci.

Novak Djokovic (Tennis No 1) on Vaccinations

This page and the Professor Johan Giesecke, one of the world’s most senior epidemiologists, advisor to the Swedish Government (he hired Anders Tegnell who is currently directing Swedish strategy)

However – he still seems to support the idea of an “immunity passport,” even though he acknowledges that the “anti-body” test isn’t reliable (and how could it be when the virus itself hasn’t been identified and no one is immune to the “common cold” (another form of corona virus anyway).

Further to my recent video on the Corona Scam, if you would like to help raise awareness in your local community by handing out leaflets, the A5 leaflet I have prepared is available here, https://www.richplanet.net/corona/CORONA_INFO.pdf

Two people drew this to my attention, about the software used to model pandemics – and one which was used, apparently, to come up with the “500,000 deaths” figure – used to, apparently, “scare” Boris Johnson and other ministers. https://twitter.com/neil_ferguson/status/1241835454707699713

I’m conscious that lots of people would like to see and run the pandemic simulation code we are using to model control measures against COVID-19.  To explain the background – I wrote the code (thousands of lines of undocumented C) 13+ years ago to model flu pandemics… 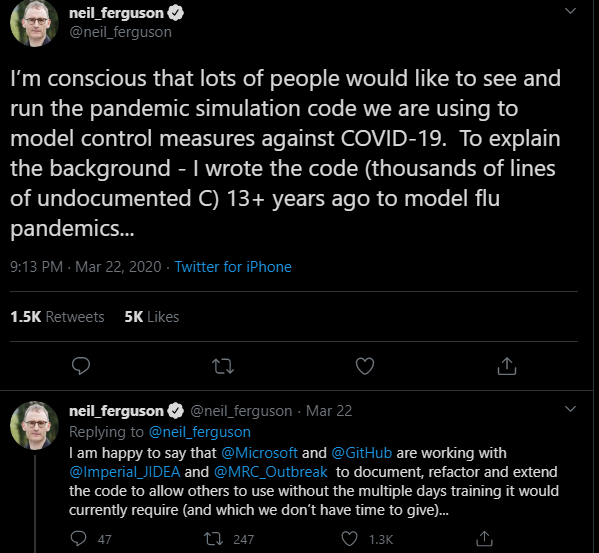 Great that he never documented the C code! So no one could easily see how it worked, or how well it actually matched his mathematical models!

This point is considered in this long article on “The Pause”

It covers many points I’ve included in earlier “updates” – but later points are more speculative. In includes a couple of videos by folks saying that the “virus” is causing weird lung damage (the “New York Doctor – at home – sstill in his “scrubs” – says this). I am really not sure what to think of these videos. Again, if we have an increased excess mortality then we can be more certain of “something wicked this way has come.”

This speaks for itself.

He has 75% or more share holdings in  PORTON BIOPHARMA LIMITED –  Company number 09331560 – here is their website https://www.portonbiopharma.com/products-2/

About Erwinase®:  Erwinase® is indicated for the treatment of Acute Lymphoblastic Leukaemia (ALL), a type of cancer that particularly affects children. Erwinase® is an asparaginase enzyme derived from the bacterium Erwinia chrysanthemi that is used as part of the treatment protocols in conjunction with radiotherapy or chemotherapy. 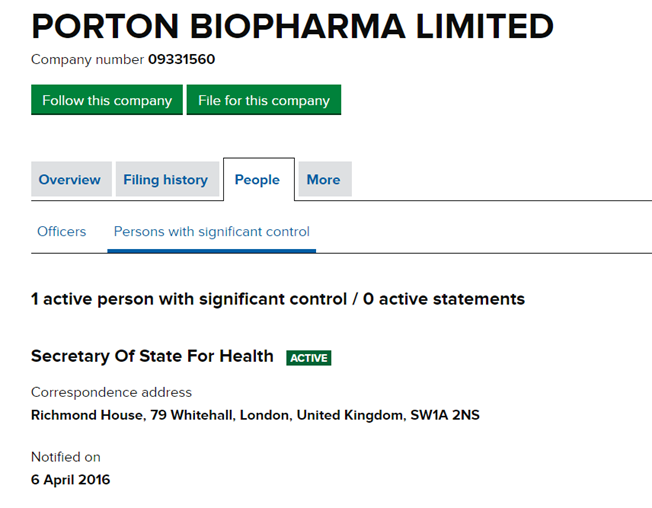 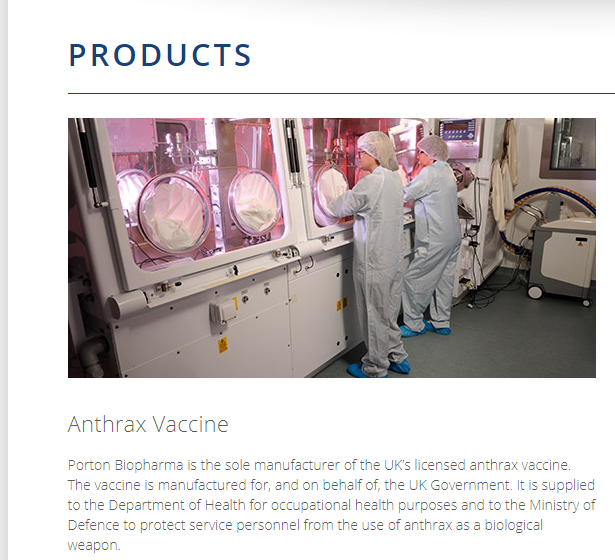 Terrific to meet Bill.Gates at #wef19 today to discuss the importance of tackling antimicrobial resistance at the global level

Dr Kaufman covers some of the same material as before, but makes some additional points about how people are more likely to see dead bodies coming out of houses – as fewer people are dying in hospitals at the moment.

I was surprised to see this on a “Sky Channel” – though he still thinks some of the measures are justified (based on no real evidence) – but he is brave enough to point out the models were only a couple of orders of magnitude (or more) wrong.

What if the lockdown was a big mistake?: Ron Paul

I can’t disagree with him

First of all, thanks for excellent work.

You call for, as an objective that I agree 100% with, the immediate reversal of the current measures. But I believe it should not stop there. There should also be mass prosecutions of those resident in UK forcing us into this misery either through the expectation of some gain or out of negligent compliance. I am not a legal expert, but I would guess there to be a range of charges that could be brought from treason down to criminal negligence. Deaths resulting from the current draconian measures would need to be assessed for charges for murder.

This would also set an example for the rest of the world. There are plans for “future pandemics” that you will be aware of. We need to make sure these never happen again.

A Slip Up Before the Trump Press Briefing?

Two people sent me this – one official says to the other that he can “take off his mask” – and then “a hoax” is mentioned. Some folks have suggested this was “leaked” deliberately – who knows…