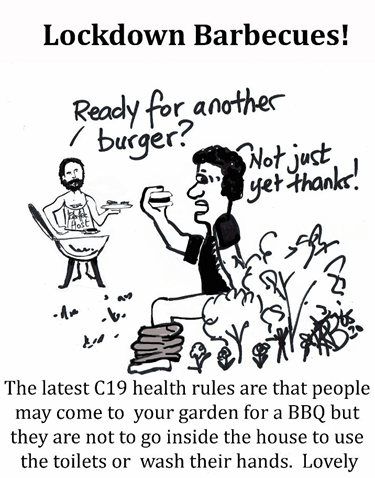 Thanks to Eddie for this link

On 16 March 2020, Ferguson from the Imperial College, COVID-19 Response Team, published a paper whereby 2.2 million deaths were projected in the U.S. and half a million in the U.K. [31].

However, it is clear that the number of COVID-19 deaths was many times lower, of the order of a flu, or even less, and this is not due to the social distancing since anyway, most of the people are asymptomatic to it and only the elderly with multiple underlying conditions are in potential danger [32]. Very rarely, younger people with bad health are affected. As we have seen, the death toll of mechanical ventilation was about 13%, and in the reference, we also see the figure 13% appearing as death toll for the elderly above 80 years. Coincidence?

Prof. Montagnier, Nobel Prize winner, and discoverer of the AIDS-related HIV virus, says in an interview that the genome sequence of COVID-19 contain exact parts of the HIV virus and consequently, is manmade [14]. The genome details are given in [15]. Furthermore, he hypothesizes that it was not biological warfare but an accident from a laboratory, and he expects that the virus quickly mutates into a harmless virus because of the artificial strains. He also confirms that a specific lab in Wuhan has received large U.S. funds in the Obama era

I was contacted by one of the authors of this site – looks quite professional.

There are several downloadable documents, covering some of the legal aspects.

Where I begin to disagree with what you is in the “Full recommendations,” though is that there is no extra requirement for isolation of anyone – and certainly the testing of people is irrelevant – because the test does not work reliably, if at all!  Knowledge and understanding of this means every aspect of all the measures – and the figures used – fall(s) apart!

The long document is great – but does not include information about the vested interests of government ministers and advisors such as Matthew Hancock and Chris Whitty. This also needs to be revealed/explained to people that want to know more. Also the facts about the WHO and Tedros Adanhom are absent.  I totally agree about the unlawful actions of the government, but this also needs to be understood as part of a larger picture of global fascism being rolled out – e.g. when governments make “under-the-table” deals with pharmaceutical companies (which is what I mentioned in my report – based on evidence I collected in 2009).

Another Update from Simon Dolan

Just a very quick update to say that there is additional correspondence up on the site. Same place on the home page – is at the bottom left

Things seem to be moving very much in our favour – we keep fighting. Govt have until 12th June to issue full defence.

Thanks to James B for alerting me.  There are some redactions in this document too…. Hmmmm…. On reading some of the document, I found it increasingly difficult to convince myself that it was just about public health concerns over a genuine pandemic threat….

One element that should be considered, perhaps not accessible through mainstream polling, is that whatever the new guidance is, there will be a sizeable number of online commentators and influencers who will frame it as governmental overreach and a breach of the fundamental rights of a citizen. The reality of the legal framework under which this is done will not matter. What will matter is the perception of the individuals involved. This will have an impact in the medium to long term, especially on how these individuals, communities and the general public may react to a re-imposition of lockdown conditions if there is a second outbreak.

How to limit the resonance of these views with the general public is a key consideration. One important element of this will be to clearly articulate when the limits on protest will end and making sure that this is what actually occurs, otherwise there is a danger of losing public trust completely, which will be very difficult to get back. (i.e. a situation where the public will trust the NHS but not the police (2nd Peelian principle) and/or Government.

Quote: “Patients fearful of visiting hospitals and doctors’ offices are dying because COVID-phobia is keeping them from seeking care.” This must’ve been part of the plan. Even a child could see the consequences of the massive fear-mongering that was done in the early part of the year.

No real mention of evidence which proves CV19 isn’t really a threat to healthy people. Just that fear of it is killing the less healthy.