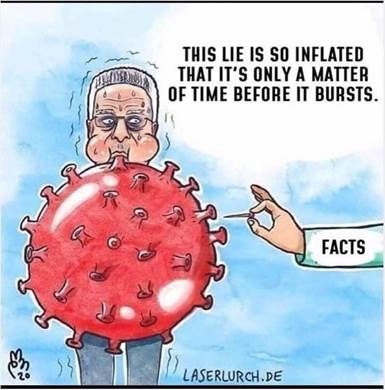 Posted on 30th September 2020 by The Bernician

Here lies the Notice of Intended Private Criminal Prosecution, which was served upon every serving MP by email this morning, for and on behalf of the British people.

You are hereby served notice that it is my intention to lay information in a Private Criminal Prosecution against yourselves, alleging that the following crimes have been committed against the British people:

1. Section 2 of the Fraud Act 2006 has been repeatedly breached in the enactment of the Coronavirus Act 2020 [the CV Act] – an act which was founded upon a series of dishonest statements relied upon by every serving MP. Namely:

a. That there was a genuine public health emergency, which justified the draconian measures taken.

b. That there was a legal basis for such an act to be passed into law.

c. That there was no viable alternative course of action that could be taken to “flatten the curve” of alleged COVID-19 deaths.

2. In addition, the CV Act unlawfully purports to have suspended the democratic right of every Briton to remove the government from office, as well as the individual rights guaranteed by the Common Law, which are beyond the jurisdiction of the legislature.

3. The CV Act also purports to have legislated for the falsification of death certificates, which has enabled the government to grossly inflate the number of people who have reportedly died of the COVID-19 virus, which in any event has never actually been proven to exist.

4. Nevertheless, the ONS data shows that the government policy which was enabled by the CV Act doubled the average five year UK mortality rate, which is considered tantamount to genocide under international law, when the fatal refusal of care to patients in care homes and hospitals is taken into account.

5. Furthermore, the enactment of the CV Act also comprises a fundamental breach of the Treason Felony Act 1848, in that it treasonously purports to authorise ministers of the Crown to govern the People by royal decree or proclamation, which is strictly prohibited by articles 1 and 2 of the Bill of Rights 1689.

6. In any event, as Lord Coke, the draftsman of the Petition of Right, said in the 1610 decision of Thomas Bonham v College of Physicians 8 Co Rep 107a; 77 Eng Rep 638, commonly known as Dr. Bonham’s Case, in the Court of Common Pleas:

Should you collectively move to set aside the act which the Common Law ajudges to be repugnant, as well as void ab initio, as per the Dr Bonham case, no later than the midnight on the 2/10/2020, this action will be suspended.

However, in the event you fail to do so, for any reason whatsoever, a QC and legal team will be engaged to lay the information before a court of competent jurisdiction at the earliest opportunity and the Private Criminal Prosecution will commence.

Please be advised that a Grand Jury of the People has already determined that there is sufficient evidence to indict every MP for fraud, treason and genocide. This is your last chance to leave your mark on the right side of history because there is no jury that would not convict every complicit member of Parliament on the charges that will be laid.

Nevertheless, I trust you will see the devastating error you have made, before it is too late.

For & on behalf of the British People – All Rights Reserved

This notice represents the last opportunity that every serving MP has to put right their wrongdoings against the People and was served upon them all this morning, as they prepared for a Parliamentary debate about whether the unlawful and void Coronavirus Act 2020 should be treacherously applied for another six months.

In the event that enough MP’s do not rise in opposition to block the de facto government’s attempt to perpetuate its own unaccountability until next spring, by midnight on 02/10/2020, a top QC will be engaged and the charges will be laid in a criminal court against every serving MP.

Let’s hope that enough consciences are sufficiently agitated to make sure that the tyrannous act is struck out as void and unlawful, with those responsible for crimes against the People being prosecuted with the full force of the Common Law.

Because the most likely alternative is that the People will hold them all jointly and severally liable for every one of those crimes, in Common Law courts and genocide tribunals.

“Proof that the pandemic was planned with a purpose”

This page holds some interesting bits of evidence – I don’t vouch for all of it – but much of it covers the same ground as I have covered in the various postings here.

What’s next for our foundation? I’m particularly excited about what the next year could mean for one of the best buys in global health: vaccines. https://b-gat.es/2r89yAC

Why Not Put the Unused Ventilators in the Empty Hospital Wards/Units….?

8 Most of the new ventilators are being held in reserve. As at 16 September only around 2,150 mechanical ventilator units acquired through the programmes had been dispatched to the NHS. This is because the anticipated demand did not materialise. The remaining units, which were largely purchased in case of increased demand in future waves of COVID-19, are stored in warehouses, including the Ministry of Defence’s facility at Donnington, as a  central reserve. DHSC and NHSE&I told us that they are distributing some of these devices to NHS trusts to prepare for potential future waves of COVID-19 (paragraphs 2.17 and 2.20).

This sort of incident is happening constantly, all over the world, as cult members react to those who won’t conform to the cult’s wishes.

I’m writing because an incident happened on the first of two buses home from work this evening.

I asked the driver for my day ticket with the correct fare. He asked me where my mask was. I told him I don’t wear one and because I’m polite, I apologised explaining “I can’t breathe right” in them and apologised again and asked for my ticket. He asked me for my exemption card and I said I don’t carry one and neither should I be questioned about not carrying one.  Well he didn’t like that.  I asked for my ticket a 3rd time.

He refused the ticket and we then argued this point a while during which I was trying to pull up the Government website to show the relevant information.  However I was too upset and angry not to mention embarrassed because people were looking and I was unable to concentrate on getting the information quickly enough.

And during which, the bus driver turned off his engine involving all other individuals, who, if they weren’t entirely focused on me before, they were now in a palpably negative way because someone one shouted that I should be ragged off the bus by my hair.

As if that’s not enough your driver accuses me of putting his grandson in danger! I have never met this man before, I would never but anyone’s life in danger. How dare he say that to me!

He then gave me a mask which I can’t wear for reasons I don’t have to and shouldn’t have to explain in public.

Eventually he started up again and gave me my ticket.  I took my seat amidst a dozen or so snarling passengers.  Not a nice feeling given the accusation I had just received and the threat of violence I had just heard.

Please explain your Covid 19 policy in relation to staff training in customer service and how it complies with the law and Government information cited and linked here under the heading Exemption Cards.

Is your employee right to not allow me to travel? Indeed is it right that he is even policing this matter with nasty accusations and aggressive behaviour.

Can you explain to me why a note written by me on a piece of paper and shown to a bus driver has any less validity than my verbal expression of that same note.

This is not an isolated incident, though the most unpleasant and alarming experience to date. It is now 11.40pm and it has consumed my whole evening, I am still very shaken by this.  I am self-employed as a painter and decorator, a business that is all but gone now.  Though thankful for some work finally, I’d had a long day, was cold, tired and ready for my tea.  I just wanted to get home.  Is it right that I be subjected to this kind of treatment?

I await your response to this matter.