If you think this letter is worthwhile/accurate etc, consider sending similar letters to your own Police Force/Law Enforcement Group! Most likely, you will need a specific incident that they were involved in – but you could try sending something “general,” but it may just get “binned.”

Please pass this letter on to senior staff. As someone who has done work with Derbyshire Police in the past (1995 – 1997) I was truly shocked to read this story: 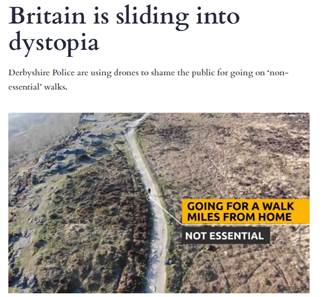 and at first believed it was disinformation – but clicking on the links, I saw that it was true: 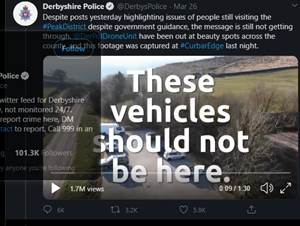 I was shocked, not just because of the “surveillance” of ordinary people, doing nothing wrong (we’ll get to that in a minute), not only because Derbs Police attempted to “shame” these people on Social Media, but also because these drones should be in use in surveying properties elsewhere, to protect shops or businesses that may be being broken into during an enforced shut down. There is far more risk of criminal activity in such areas than there is from people out hiking / walking their dog (during their “permitted” period of exercise). Also, remember, it is government guidance not law. Let’s be clear – a law against freedom of movement like this would, you should know, breach human rights and constitutional rights.

Also, how do we know that the drone operators themselves were not “spreading the virus”? What makes their work in surveillance of the peak district immune to this? Were they wearing “hasmat” suits? How can you guarantee they were “CV-free” themselves? I would guess that you can’t – hence the basis of this whole video is meaningless – and a waste of public funds.

Now, it appears you have based this video and action on faulty information – because the UK government downgraded the Corona (= “Crown”) virus on 19 March – stating it has a “low mortality rate” (see separate sheet) – yet “police state lockdown” measures have been added, not removed. Why is no one aware of this? Why has no one seen that we have now got to a point which is very close to what other countries, occupied by the Nazi Regime – and those in the former Soviet Union – experienced between 1940 and 1989? So, do we now have to get “a doctor’s note” or “vaccination certificate” to go walking along Curbar Edge? Do Police want to validate these “papers” before allowing us to go about our leisure and business activities? Didn’t our parents and grandparents fight in a world war to prevent this sort of activity by officials in oppressive regimes? Just what the heck has happened since January?

We are now closer than ever to living in a system which is based on a kind of eco-health-fascism – and this latest scenario, which has been “rolled out,” is a frightening illustration of this. ALL UK Police Forces MUST operate on full and truthful information.  The truth in this case is, if properly researched, that this so-called virus is actually not much different from “seasonal flu” – and most healthy people are not really affected any differently (and even this has been stated and illustrated in the thoroughly corrupted UK Press). The real and deadlier “virus” has been spread by the mainstream media – reporting the normal daily death rate – and attributing most or all of it to “Corona Virus.” If you don’t believe me, look for all the  reports of deaths – and find how many didn’t have other health problems. The terrible, awful “lockdown” measures have already done vastly more damage to Britain and its people than any so called “virus” ever could have. Of course, as Boris Johnson has now tested positive for this “deadly condition,” we should just have to wait and see what effect it has. Will he become incapacitated? Will the deputy PM take over? Will the virus kill BoJo? Or has he, really, just “caught a cold” and is “having a laugh” at all the people who have fallen for the scam?

If you care about the future of our country, I implore you to start researching this whole matter – rather than just uncritically and unquestioningly “following a script” handed down from “on-high” by some group or groups that appear to have global, pan-governmental influence or control. Why don’t you, as an example check into the history of the person – Tedros Adanhom – who “declared” the pandemic in the first place? You can check, for example, whether he has any kind of criminal record.

I trust you will share this letter with other Police Forces and ensure our basic freedoms – including travel, free association etc, are maintained – instead of being stomped out – because too many people have been taken in by some dubious, unproven story about an alleged “killer virus.” If the situation becomes worse and results in civil unrest or a breakdown of our society, the blame will be shared by any officials in positions of authority – who can’t or won’t check facts and simply “roll over” and “get with the programme” rather than performing “due diligence” and checking whether a story being given to them (with allegedly grave consequences) is actually true or not.

Yours in disillusionment and exasperation,

PS. Please don’t come and arrest me for critiquing and unpicking government narratives and propaganda. I don’t even know if there is now a law against this. Maybe such a law was “rushed through” in a ¾ empty parliament at midnight during a fake/contrived crisis…